Yes, the WGA strike is still on, leaving fans in the mercilous wake of  other fans who will rewrite dialogue on Stargate Atlantis  (never mind that the dialogue is already written and filmed). So, without further ado, this is what happens when good caps fall into bad hands (insert JAWS music).

Oops, these caps are from the SciFi.com video promo (or TV ad).

Jeanie McKay's hubby goes downstairs to get a glass of warm milk but eegads, he discovers mutant rogue Jedis robbing his house!

"I just wanted some milk with my brownies!" Caleb screams in agony before being taken out by the Jedi, who then viciously chops the head off Madison's stuffed elephant toy. (scene deleted for the sake of impressionable minds)

"Mutant Jedi? Wrong universe pal, we deal in life-sucking Wraith and alien bimbos who can't keep their hands off our military commander, well, Sheppard that is, as our military commander is now a woman and that would be wrong on so many levels, well, unless there was a Jell-O arena involved."

"My wife was kidnapped because of her association with YOU. Well, you remember those brownies she sent you last Christmas? They were TOFU!"

Meanwhile, Jeanie finds herself the prisoner of the evil mutant Jedi who work in an awful mundane warehouse.

Rodney figures if he can handle Wraith, taking down a few mutant Jedi should be no problem.

Oh no, they have lightsabers and Rodney forgot to bring a gun.

Insert girly, no, manly, no girly scream of hideous terror!

Alas, Rodney has yet to learn that putting up arms never deters mutant Jedis, Wraith, or girl scouts trying to make their sales. 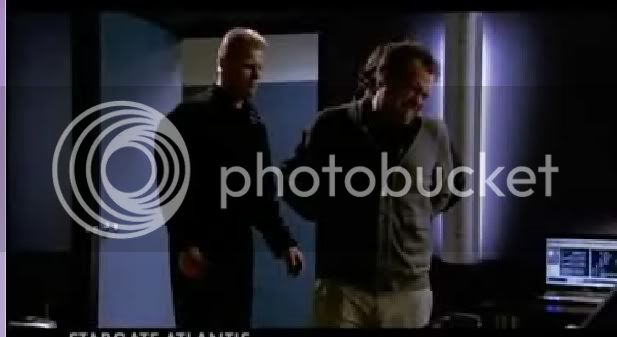 "Ow. Ow! My hands! They're valuable. I'm the only one who can type complex equations to save the solar system, well, except for the five-sixth of that one section I mistakenly blew up."

Rodney has absolutely no idea how he's going to rescue Jeanie now that he's been abducted too, but he could swear the mutant Jedi now look more like ninja, or no, even worse, *gasp* studio executives!

But, he still has a bone to pick, an axe to grind, insert another simille, because Jeanie sent him TOFU brownies! "Was it because I dismembered your Barbie when we were kids? I was simulating the effects of a black hole for a science project."

"I LOVED that Barbie!"

Meanwhile, out in a parking lot, Sheppard and Ronon are mugging some poor sap for spare change because they ran out of gas (this is the problem with never-ending energy in puddlejumpers, you get SPOILED!) and they had no idea gasoline was over $3 a gallon and climbing.

Unfortunately the guy they mugged had no cash, just credit cards which were already overextended, a gun, half empty box of sugar-free Chiclets, and a photo of Rodney. Oh wait, photo of Rodney. He must be a bad guy! Meanwhile, Ronon starts down the road to ruin on Chiclets, which will be covered in a season five episode. The producers said the show was gonna go dark, remember??


And that's it for this week's exciting installment of rewriting Stargate Atlantis. Well, this week and next, since this is a holiday week.