MGM, at www.mgm.com/stargate, has put up a batch of spoiler shots from "This Mortal Coil" that really don't spoil much, but I also did a few caps from the TV commercial as well. And because there are no scripts handy, and the writers are still on strike, I've provided my own incredible lines of extremely believable dialogue (I mean, it's so easy to read between the lines, you know?)

Nah, don't watch the preview. Why waste the time when I've transcribed it all for you? ;)

"We've got a serious problem. The last batch of sticky cinammon buns has vanished from the mess hall!"

"This is serious. We're going to have riots if we don't find the culprit before the end of the episode! We'd better inform Colonel Sheppard!"

But it's already too late.The tempers are fraying. Ronon, crumbling from his sugar addiction,  takes it out on Sheppard in the gym by whacking him silly on the butt with a big stick.

"Doc, you got any, um, er, ice packs? Large ones? Maybe some aspirin?"

"Somebody with sticky fingers stole the sticky buns? Oh no.... Ronon is so obsessed with his buns."

Radek works feverishly on trying to determine WHO, no wait, or is that whom? the brazen sticky bun thief is, and the DNA traces left behind on the cheap aluminum pan implicate....OHMYGAWD....

Ronon: "Nobody messes with my buns and gets away with it!"
Rodney: "Nononono! I'm not the thief! I only licked your buns! Just the icing. Honestly, I only used my tongue!!"
Sheppard: "Let's just scrape off some DNA anyway." 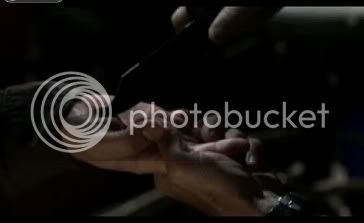 Sheppard: "Oops. Sorry about that."

Keller just sighs. When Carter's not in the picture (you don't see her, do you? no) the children just get into all kinds of trouble. Besides no sticky buns, she's now running out of stitches because of Shep's amateur CSI efforts. "I'm sure the thief is probably located off-world on a planet that looks a lot like some park in Vancouver."

Sheppard: "My god, Rodney. She's probably right. It's about time we went off-world to find the solution to this problem. I bet the Genii stole the sticky buns!"
Rodney: "Well, it sure wasn't me. I'll never play the piano again cuz you filleted my fingers. And yes, I could play the piano before."

Ronon: "This is pointless. I've killed twenty Genii and none of them admitted knowing anything about my cinammon buns."
Teyla: "Perhaps you should have not have asked each one if they'd taken a bite out of your 'sweet buns.; Then I am sure  they would not have tried to kill you.

Ronon thinks about it, but his buns are sweet so what is she trying to imply?

Hmm, Ronon wonders if Teyla is trying to draw his attention away from the real culprit. Despite strategically positioned laptops and a change of clothing over the past several episodes, er, weeks, um, months, Teyla has been looking, er, um, a little plump around the middle.  So, he calls Sheppard to inform him of his  brilliant deduction.

Ronon: "So, you're the thief. I can tell. If I poke you with this stick in the stomach, well, you sure don't have those six-pack abs anymore."
Teyla says nothing, her eyes narrowing in utter contempt......

Meanwhile, chaos erupts on Atlantis just as Lorne predicted (which means, he wins the betting pool!). Riots ensue! Panic! Screams of desperation! Plants are destroyed and people are running amok like squirrels on crack!

Only for Rodney, Teyla and Ronon to find themselves mysteriously stuck in the Wraith prison/cell deep within the bowels of Atlantis. None of them know how they ended up there as during the commercial break for that gawdawful TIN MAN SciFi miniseries (which they might have watched if not for the repetitive ads that never, ever, ended and argh!!!!!!!) , they went to the kitchen to get a snack and poof, commercial ended and they were in prison. Damn, that sucks.

But they have time for expository dialogue to fill in the gap!
Rodney: "Well, I know I didn't take your buns. Okay, I touched your buns. I licked your buns, but I did not eat your buns."
Ronon: (insert noises of angry grunts)
Teyla: "But John told me that Radek that .... oh no. You don't think that...."

Dramatic music swells as the sticky bun thief turns and faces the camera. It's none other than Sheppard!!!  Or.... is it??

And that's it for this week's installment of As the Stargate Turns!  And we leave you with these questions....

* Does John really covet Ronon's buns?
* And although Rodney confesses to licking Ronon's buns, who's to say he didn't actually take a bite?
* Will the edited scene of Ronon crying uncle after an unfuriated Teyla beat him silly with a stick ever make it to the extras on the season 4 DVD set?
Tags: parody, season 4
Subscribe
Previous
← Ctrl ← Alt
Next
Ctrl → Alt →
Previous
← Ctrl ← Alt
Next
Ctrl → Alt →