Welcome to another exciting, action-packed, incredibly well-written rewrite of an upcoming Stargate Atlantis episode. Yes, MGM, SciFi and Yahoo have put out the spoiler trailers for the episode “Quarantine,” and as the WGA strike goes into its umpteenth week, it’s up to intrepid fans such as myself to flesh out the dialogue from these trailers.

Sheppard is busy checking out available empty rooms in Atlantis on the new Atlantis bulletin board. After years of making do with a bed that his feet dangle over and get cold, he’s just had it. Oh wait… he’s found the perfect room. Balcony, ocean-view, bedroom suite with a king-sized bed! Plus a Jacuzzi in the bathroom. And he can use the spare second bedroom for his surfboard and golf clubs. Score!

Rodney wonders what Sheppard is looking at, so Sheppard shuts down the computer screen. He remembers how badly things went the last Rodney wanted Sheppard to play ‘real estate agent’ (finding ‘old Weir’) and it’s not like Rodney needs more space for all those damned diplomas and awards he keeps plastering all over his walls).

“A diamond engagement ring!” Rodney beams. Sheppard gulps. “Uh, Rodney, this is so… sudden.” And crap, he had no idea that Rodney was interested in him in that way. 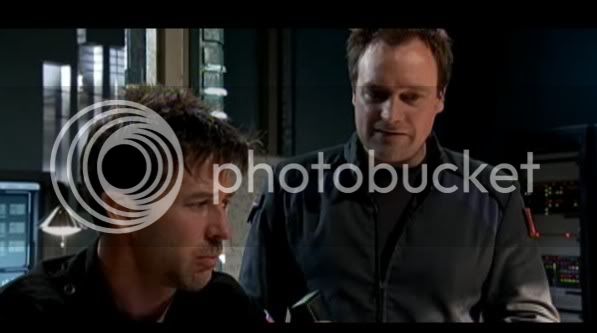 Sheppard tries to keep down his panic, because this is gonna make those after-mission showers rather unsettling as Rodney is always dropping the soap and good grief, did he have an ulterior motive when he asked for the shampoo?? But then Rodney fortunately blathers on about asking Katie to marry him. Oh, thank god!. But, that means Sheppard will have to throw the inevitable bachelor party and make sure Carter doesn’t find out about it. That’s gonna be more dangerous than facing down the Wraith!

Rodney continues to babble on about marrying Katie and how wonderful it will be and they’ll have 1.5 kids (all geniuses of course) and it won’t be anything like Sheppard’s failed marriage, which Rodney knows nothing about except what he heard from Ronon, which was basically nothing cuz the Satedan barely speaks anyway. Sheppard resists the urge to stick his fingers in his ears to blot out the droning noise.

“And well, once we get married, we’ll need more space.”

“Oh yeah, that’s fine,” Sheppard mumbles, wondering how much Rodney shelled out for the diamond which he is sure is actually cubic zirconium. And then (insert ominous music stolen from a bad Saturday Sci Fi channel movie) Rodney mentions something about a room over in sector 5, level 2, with the Jacuzzi.

Oh crap! That’s the room Sheppard wants!! And what the hell is Rodney making that face for??

Sheppard knows he’ll never dissuade McKay from snatching that prime real estate, so he must act before the astrophysicist can figure it out.

“Are really sure you’re ready for marriage?” Sheppard quickly remarks, grasping for pitiful reasons to end the marriage before it even gets started. “I mean, think of the tax implications!”

“Yeah, it’ll throw me into the accursed married tax bracket,” ponders the scientist. “But, I’ll get dual citizenship! Not to mention, I won’t have to beg for sex. Right? I mean, when you’re married, you get it when you want it, right?”

Geez, Sheppard’s never realized McKay could be so pitiful. Surely he’d already gotten ‘some’?? Nah, on second thought, Sheppard really doesn’t want to think about that.

Rodney quickly rushes from the room (nearly flattening poor Teyla in the process.). He’s gleefully thinking of how easy it will be to get through Customs now whenever he’s back on Earth with dual citizenship!

A picture of the wonderful shelving and some doodads on it in the much-coveted apartment/room that will soon be the focal point of a dramatic new episode of Stargate Atlantis!

Katie just SQUEES in delight when he proposes to her. Marriage, and better yet, a bigger room with a better view and good light so she can fill the spare room with plants! Including that wonderful lemon tree she just got delivered from Earth.

Sheppard told Teyla about McKay’s impending nuptials and how, seeing as she’s on the team, she should run the bridal shower. She has no idea why Sheppard thinks Katie needs to take a shower.

But more importantly, Teyla is relieved that everybody knows she is pregnant. She was getting really tired of the fat jokes.

An alarm sounds. Ohmygawd, the city’s in lockdown. Everybody is trapped! They’re all going to die horribly of some hideous virus (as if they hadn’t encountered that scenario just a few episodes ago). Man, this is getting old.

Oh. No, wait… Rodney suddenly realizes that’s the alarm he left on the room he badly wants. It’s gone off. Someone is trying to usurp his dibs on the room with the great balcony. “Do something, Rodney-kins!” Katie howls in distress.

“Another paper cut, Ronon?” says Keller, ignoring the blaring klaxons that might signify imminent doom, because she’s got her hands full` and Ronon’s eyes are so deep, like pools of chocolate mousse.

“Accidents happen,” intones the Satedan in a manly deep voice. He then strikes a few manly poses so that the Earth physician gets the hint he’s interested in her.

#3 - And lastly, showing off all the good parts pose. McKay told him women love this kind of stuff.

Oh… wait… Insert gratuitous manly pose of Zelenka (ohmygawd, look at his arm, see, a hint of flesh in the bottom corner) and doesn’t Chuck look stunning and I’m too lazy to edit out the woman at the right who doesn’t belong in this manly pose fantasy shot. Oh wait, back to Keller and Ronon, but really, she’s passing up some prime beef here. * cough *

Keller tells him he should have just asked her out instead of doing through all that dumb posturing, but on the other hand, he’s got a really nice ass. Hmm, when was the last time he had a physical?

In another part of the city, Sheppard meets clandestinely (that means, it’s a secret!) in an air duct with Zelenka, as the colonel needs to score some of the Czech’s moonshine (which, of course, he makes. Hey, I read the fanfic. Zelenka’s practically running a moonshine business on the side!) for the stag, er, bachelor party that night.

Zelenka agrees to do this if he can keep Carter pre-occupied during the preparations. Since McKay’s now going to marry Katie Brown, that means Carter is up for grabs!

Zelenka looks all innocent while trying not to be obvious as he eyes the delectable scientist in her nice tight uniform. He says he knows nothing about parties for hunting deer, but Sam knows Sheppard is planning a stag party for McKay and that kind of debauchery will not be allowed on Atlantis, particularly she since wasn’t invited!

She points at the memo from Sheppard that says “Top secret – stag party at 8:00 pm tonight. Don’t tell the women.” Oops. Zelenka knew he forgot to do something that morning. Erase the incriminating email.

Meanwhile, Lorne returns from the mess hall, where he went in full combat gear because sometimes things get pretty ugly when people fight for that last chocolate chip muffin.

“Bad news, sir,” says Lorne. “I heard scuttlebutt that McKay’s put in dibs on that room you wanted.”

Lorne thinks that Sheppard blowing out a wall to expand the room into a bigger suite is a really bad idea, but Sheppard says that if he starts the renovations, the room is his. Possession is 9/10ths of the law, squatter’s rights, and all that other legal mumbo jumbo. He presses the button.

Alas, the missile goes a tad bit further than anticipated and punches through the infirmary.

Where, as it happens, Ronon and Keller were just about to get started on the Satedan’s complete physical. Damn, curses Ronon. Damn, curses Keller.

“I’m ordering you to get us out of this elevator now! Stag parties are against IOA regulations. We’re not here to have fun! We’re here to get alien technology and kill any aliens that disagree with us.” Zelenka realizes that his fantasy about Carter left out this part about her being such a blasted stickler for regulations.

Zelenka decides to comply, and also partially electrocute himself so he can play the sympathy card and not get called on the carpet like he knows will happen to Sheppard.

“Uh, colonel. The colonel’s escaped from the elevator. She KNOWS.”

Knows about what? The extensive damage caused by his renovation efforts or worse, the stag party? Oh crap. He’d better get the hell out of Dodge before Carter finds him.

So, he decides to escape out of the closest window by tossing a chair through it. Who would have thought that the outside windows on a flying city that goes through the vacuum of space could be so easily broken….?

Talk about your cliffhanger! Will Sheppard get back inside and escape Carter’s wrath, or will he slip off the side of Atlantis’ tower and go SPLAT on the city’s base below? What will Rodney say when he learns Kate wants to move her LEMON tree into their new digs (which must be his, as Shepaprd seems to have disappeared so if he moves in with his laptop, hey, possession is 9/10ths of the law!). And will Ronon ever get that much-needed physical? * cough *

Stay tuned for the startling conclusion of “Desperate Lanteans”!