hopefAnd I guess SciFi is going to give us 3 Q&As for each actor on Stargate Atlantis. Below you'll find part 3 of the Amanda Tapping Q&A, which is available at a video at SciFi

Below you'll find nearly three dozen screencaps plus a complete transcript. Enjoy! Oh, there is a clip from the unaired episode TRIO which could be considered spoilerish.

CCDSAH: Will we find out if Jack & Sam get together this season?

Amanda: Are we going to find out if Jack and Sam are together? No (shows clip of AU Sam telling Jack she’s interested in Daniel). But…there's an interesting little line in the episode "Trio," which addresses it. An interesting little scene between Jewel Staite's character and myself. (clip from TRIO, followed by clip of AU Sam and Jack kissing)  You know, in our writers usually so subtle way. But yeah, there's an interesting line that addresses it. But he doesn't come visit me, which is why I'm asking him to.

WRAITHFODDER: The leather you wear in the promos, will you wear it on the show?

Amanda: Well, Wraithfodder. The leather outfit is actually the team's going-away outfits. They re-designed all the wardrobe this year. New costume designer, and a total re-design. So Carter actually does have an off-world outfit that, um, is black leather, and sadly, I think I only get to wear it in a few episodes. But, it's pretty hot. It’s pretty - I mean hot physically, it's leather  (laughs) .It's very cool, and we knew like taking the publicity shots that it was a little, you know, it might look a little camp, but I think actually that when you put all the outfits together and you see us all in our black leathers, it's pretty cool. So, I like that. 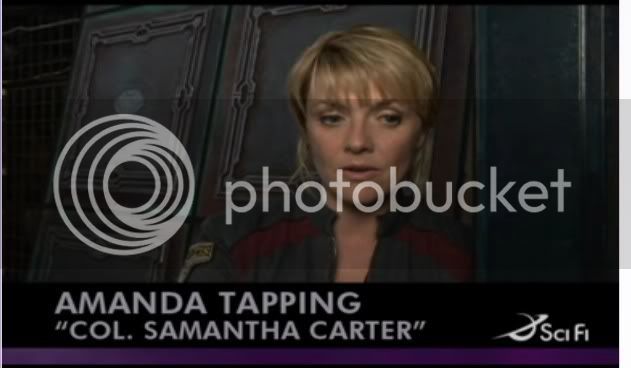 CCDSAH: Did you and Chris push for the romance in UNENDING?

Amanda: Why did - ? Actually, Christopher and I didn't push for Sam and Teal'c's romance. We didn't actually even say anything to Rob Cooper about it. We just chose to play some really subtle moments that you could pick up on or or not pick up on. We wanted to leave it really ambiguous, but for Christopher and I personally, we felt that if you were stuck on a spaceship for that long, and given the camaraderie between these two and the love - the genuine love that they have for each other - that it was a natural progression after that much time that something would happen. (clip of spaceship blowing up)  But we didn't push for it. We just chose to do some very subtle moments, during the montage, and the scene after General Landry dies, which could be perceived as just really, really close and wonderful friends, or as lovers, depending on how you to chose to see it, so Chris and I just chose to play subtle moments, and it was moments that - I don't even know if some of them appeared on camera.. but looks between the two of us, like when he says that he's going to go back and fix the problem and he'll be the only one who remembers what happens, and we have this really knowing look between the two of us. That we played as if, you know, he's going to be the only one who remembers our romance, and I'll totally not remember it, and nd then when we were in the Gateroom afterwards, when everything is back to normal, we do another look. He gives me a look, and I'm what does that mean? We just chose to play subtle moments. We felt that it made sense. And because it's fun.