WTF? A big glowy ball thing rolls into the SGC.

As a whole bunch of wraith enter the SGC, Dr. Lee pulls out his hair (what’s left of it). They don’t have enough munchies for a crowd this size! Oh wait, phew, they’re only being invaded by killer aliens. And the glowy ball was just their carry-on luggage.

And the Wraith begin to infest the base like cockroaches…

Ronon, meanwhile, is checking his watch. Rodney said he’d have the satellite TV on Atlantis fixed in time for the ECW smackdown marathon for the Macho-Marine marathon. They need to hurry it up.

Ronon suggests splitting up so they can hunt the Wraith. It’s the macho thing to do.

Teal’c agrees. Even though a tiny little voice in his head is screaming “No! Don’t! This is when the giant spiders eat people in bad scifi movies, like the ones Mitchell always kept showing you!”  But since he hasn’t had any Goa’uld to kill lately, he’s itching to kill something. 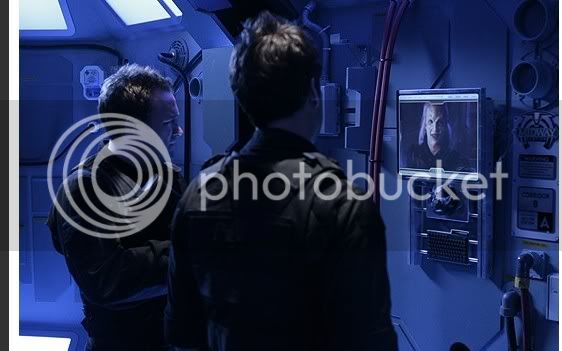 Meanwhile, back on the Midway station, Sheppard in unaware Earth is being invaded by Wraith because McKay has dragged him off to help repair the satellite link so they can show the Smackdown marathon. The Marines are getting friggin’ testy, and the scientists will be next if the Bill Nye The Science Guy marathon doesn’t materialize on Friday. But this doesn’t look like channel they’re looking for. But suddenly, they hear a noise.

“McKay, what the hell is Lee doing hiding behind the console?”

“How the hell should I know?”

The Wraith have invaded Earth and are raiding all vending machines. It’s horrible, I tell you. There are CheetosÔ crumbs everywhere! Oh, the humanity!!”

After Sheppard knocks Lee around to snap him out of his Gerbil-like panicked state, they ponder the situation. They wonder how the Wraith could have snuck past them on the Midway station, but then they did briefly have a good satellite connection and did waste, er, spend a few minutes watching women’s volleyball. Nah, couldn’t have. Nope.

But then Rodney accidentally patches into the wrong satellite and get the Wraith Worldwide Network. Apparently the Wraith are all in a tizzy over the theft of something called Ravenous WraithÔ Hair Gel and they think the Lanteans swiped it. Oh well, that explains everything. And they also discover that one of those Wraith is still on the Midway station. Darn, you know, of all the times for Teyla not to be there so she could point out the obvious.

Sheppard thinks about shooting the Wraith, whom he names Ralph, but now since he’s named the Wraith, he feels it would be like shooting a pet. Aw, damn. Okay, he’ll send in Lee. He’s expendable.

“Excuse me, Ralph, er, Mr. Wraith, we don’t have your hair product.”

“You Lanteans stole my master’s personal supply of Ravenous WraithÔ Hair Gel. Do you think we Wraith do not style our hair? That all we do is plot world domination and eat people? We have lives too! I’ve got split ends!!” Ralph snarls in contempt. “And this, this is the ringleader of the theft!”

Insert picture of dastardly Lantean who used up all the Ravenous WraithÔ Hair Gel in just one season. Go figure. (cap courtesy Stargatecaps.com)

At this point, more Wraith hiding on the midway station attack!

I didn’t steal your damned gel. I use mousse!” shouts Sheppard.

Meanwhile, back on Earth in the rather drab SGC, whose halls are littered with orange Cheeto’s crumbs and squashed Ho-Hos… The carnage is so indescribable that well, it’s best left to the imagination so that young minds are not forever traumatized by visions of squashed M&Ms littering the corridors.

Ronon’s pissed. So what if he’s stumbled over half a dozen sucked-dry SGC guards -- the Wraith trashed the vending machines. It’s all gone! The trail mix! The CheetosÔ! The … and Ronon nearly cries … the chocolate crème filled cupcakes!

He hears a Wraith approaching.

Oh yeah, and in another part of the SGC, Teal’c, having foolishly gone off on his own figuring ‘oh hey, I’m a Jaffa, I’ve survived the Goa’uld, these Wraith are nothing,’ is pinned like a butterfly to the wall by a Wraith.

And what? No more pictures? What the heck?

Will the Wraith snack on Teal’c? Or were the potato chips and Fritos enough to sate its ravenous appetite?

And sorry you’re left hanging. But to make up for leaving you sobbing for poor Teal’c’s fate, I’ve tossed in this extra-special super-duper added bonus!

Yes, a photo from the scene that hit the cutting room. The infamous ‘Dr. Lee and Rodney talk about Kleenex” scene!