A friend from the midwest came in for a weekend visit, and wanted to go into the city (aka New York City, the Big Apple) so.... Sheppard and McKay came along (said friend is a fan who got a kick out of it).

On the commuter train into the city, the squabbling can be heard (well, not over the cellphone users)...
Sheppard: "You know this seat is big enough for the two of us, in fact, I could fit Lorne and his team and a jumper, so why don't you move over."
McKay: "Hey I was here first and it's a window seat."

After standing in line for nearly two hours (the guys were lucky, they just had to hang around packed tightly into a acamera pack), they find themselves at the Staute of Liberty. In order to blend in and not look odd, they do what virtually every other tourist is doing (although without holding up a banana or a shoe, honest, really!).
McKay: "We look STUPID."
Sheppard: "We look like everybody else. Keep the arm up. No one's noticed us." 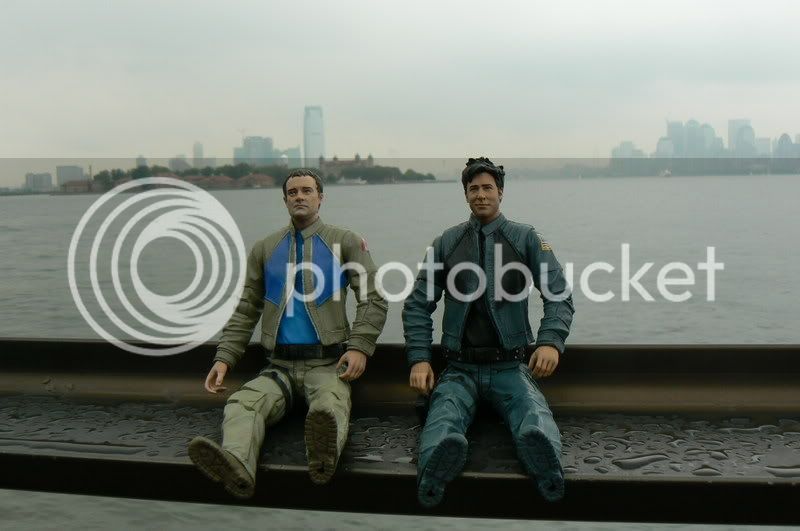 The guys take a breather on the fencing surrounding the Statue of Liberty Island. Behind to the left is Ellis Island, and to the right, Manhattan.
McKay: "You know, someone could have wiped this fence first. My butt is getting wet."
Sheppard: "I'd be more worried about that helicopter that's been hovering overhead. Your passport is current, right?"
McKay: "And I have time to fiddle with that meaningless paperwork when?"
Sheppard: "Crap."

And an NYPD helicopter hovers suspiciously over the nervous Canadian. You really didn't think that was rainwater all over the railing, did you? *cough*

Since it was pouring away at Ellis Island, the place was packed to the gills with tourists, Rodney and John remained safely sequestered in the camera bag, even when passing by the delectable fudge counter, although the photographer was sure she heard pitiful moans from that bag when ordering a small coffee...

Back in Manhattan, the guys wait in the sweltering subway for a train. And wait, and wait... and wait (sigh)...

The train finally arrives! However, the guys soon discover that their plastic butts are useless on plastic seats and as the train takes off, they swish around, hence the psuedo green complexion of train sickness ;)

And the guys pose at Central Park West, and just beyond is Strawberry Fields and Central Park...
McKay: "People are staring at us."
Sheppard: "I think it's that dirt smudge on your nose."
McKay: "WHAT? Since when?"
Sheppard: "Gee, all day."

As the guys wait for the train (again), McKay just can't stop moaning around the dirt smudge on his nose.
McKay: "It's not coming off!"
Sheppard: "Gee, it's not like you've got anyone to impress. Katie dumped you, remember.
McKay: "That was a mutual separation and... Wait, wait! Women find dirt on guys attractive. In fact, I've read stuff - they love you covered in blood and big gaping wounds. Sounds pretty twisted to me, but maybe a paper cut or two and I'll have those babes--"
Sheppard: "We are NOT talking about those whumpers!

The guys end up at Rockefeller Center Plaza, where (now through July 19th) is a 65 foot, 16,000 pound Erector Set skyscraper.

Sheppard: "This is so cool!"
McKay: "Big deal. I could have made this when I was a toddler."
Sheppard: "You're just jealous."
McKay: "Hmm, bet those whumpers would love to drop this tower on you."
Sheppard: "Don't make me push down that subway grate, Rodney."

It's time for dinner and the guys end up at TGIF (Thank God It's Friday) restaurant, where McKay goes instantly for the wildberry drink as he's just cooked from the hot temperatures outside.

But, ack, gasp, the drink was poisoned! What could it be!? (hint hovering over head)

Sheppard stares at the big yellow object that is floating around rather obviously on top. Eh, it's just a tiny lemon wedge and Rodney never got a drink, so, oh, not poisoned. Fainted. Yeah, manly hunger, sure...

The guys realize they've left their wallets in another galaxy, so can't order and are forced to hang around the salt and pepper and fake sugar tray as people around them eat Cajun Shrimp and Jack Daniel burgers (which has no relation to Jack Daniel fiction from Stargage SG-1, of course).
McKay: "One shrimp, that's all I'm saying. It's not like they'd miss one."
Sheppard: "Go steal your own food, Rodney. They're armed with knives and pointy straws."

McKay: "This is SOOOOO humilitating."
Sheppard: "Hey, it's not like this photo is every going to get to the Pegasus Galaxy."
McKay: "They could have at least ordered us dessert! Did you see that cheesecake that went by?"

Back on the train, the guys settle down to some erudite reading material.
McKay: "Hey, look! A supermodel is getting divorced! That means she's looking for a new guy!"
Sheppard: "I knew there had to be liquor in that drink. You can't seriously believe--"
McKay: "That an intelligent, handsome man doesn't have a chance with her?"
Sheppard: "Hey, you're right. Let me check my calendar...."
McKay: "ARGH!"

And that's it. Couldn't help but drag along the boys to the city. If you ever do the Statue of Liberty, get there really early. Think we spent half the morning standing in lines or one sort or another, but we did meet some interesting and fun tourists to chat with :)