I've never been a huge fan of the Bond movies, probably because as a kid, I got outvoted, missed out on BAMBI  and had to sit through a Bond flick, so perhaps I felt disgruntled toward spy movies ... ;)

Anyway, last Bond flick I saw was was with Timothy Dalton (and I'm one of the handful who liked that interpretation) and I skipped the rest (although I think Sean Connery is the best Bond but Craig comes a very close second).

I saw all the press on "Casino Royale" and decided, you know, the last film I saw was ICE AGE 2 so let's go see an adult film, which turned out to be PG-13 (I would have thought Bonds would be rated R - think they should be anyway). Saw a lot of stuff as how he didn't look good enough to be a Bond (Craig has a 'rough hewn' look that is actually quite appealing and fitting for the character).

Overall, a great flick, chockful of action and Craig makes a very gritty, believable Bond and the villians are more believable as well. No fancy gadgets to save his butt, just his wits and fists, and there's plenty of fighting.

Well, you can get the plot off any online review. Terrorists, poker games, etc. and I thought it all blended together rather well. I gather, from seeing photos and press since the whole "Daniel Craig can't be Bond" bruhaha came out months ago, that the film got some judicious editing to get it to down to a PG-13 rating, so I'm hoping we get a director's cut DVD sooner than later so we can see the rest of, er, um, Daniel Craig (cough cough).

As happens in every Bond flick (I think), Bond gets captured by the bad guys in a rather spectacular car crash, then gets tortured in a way that will have every single man in the audience crossing his legs and wincing if not cringing. Heck, even I cringed a bit! Oh, the and the poisoning scene was just brilliant.

The ending seemed to be coming, only to get a twist, and even though I've seen enough commercials for the movie, I totally forgot they were going to SINK a building (which was done very well).

Lots of action, great acting, and a Bond who is what I think James Bond should be. He's charming, but on the other hand, can be a cold-blooded kilelr (which is what I expect the job entails as silly me (who hasn't followed the Bond genre) acutally didn't know what the 'double oh' stuff meant).

And on the shallow shallow side, boy, he looks hot too! ;) 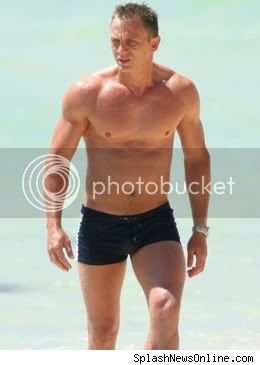