New York Comic Con, or I'm getting that Godzilla!

And I went to New York Comic Con (aka #NYCC on Twitter) and survived...

Was only able to get Friday tickets, after miserable experience back in May trying to buy them online but only to have the servers crash. I wasn’t the only one with the bad experience.
Anyway, left house at 5:30am to get friend to get to train station to go into NYC, whereupon there’s the NYCC shuttle bus, the one that takes off every 15-20 minutes, but this one sat there for half an hour. Because of the new line rules at the con, getting there early was important. At least for me, it didn’t matter too much as I was only doing the show floor (dealer’s room) and no panels, as the ones I wanted to see got moved to another building (the Hammerstein). Since my friend is disabled, we went into the line with the press, the VIPs, etc. and we could look down upon the seething mob of humanity (aka fans) waiting to get in. Of course, that day it rained on and off. Smart fans brought umbrellas. 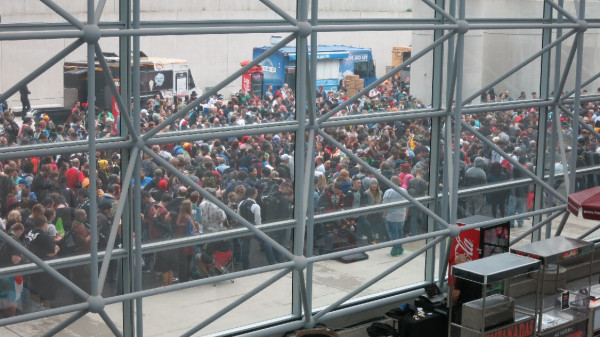 My only real goal was to get the limited edition Funko Pop 6” Godzillas, one of which glowed. Fortunately Toy Tokyo’s booth was in the Block, the more creative sales area, but when the doors opened, people just RAN in. We found ourselves screeching to a halt with about 50-70 people in front of us. ARGH! Worse, the booth was late in opening. 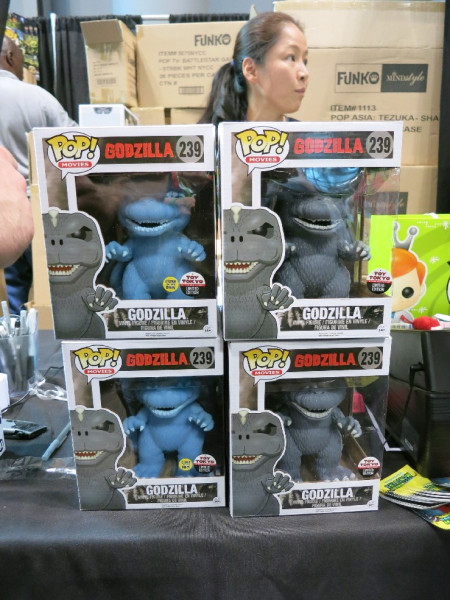 So I went down to check and was informed (on several trips there) that they were behind schedule, that the line was moving, that the line was still moving. I think the con people  encouraged them to open despite not being totally ready as the line was spilling out in the atrium area. Some guy came down the line eventually, looked at me and my friend (with her walker) and asked if we were in the line. Tired of standing, I sorta whined “yes” (in my best “if I stand here any longer I will expire on the spot” voice). However, the guy looked at my friend, muttered something her being a liability (as in the walker maybe ,or that she might pass out, or something) and said “follow me.” So we were both taken to front of line and guy there looked at me and said “why didn’t you say something?” and well,  the rules of medical badges is that it does NOT let you cut in lines.  However, we took advantage of our good fortune, got our Godzillas (I had friend buy one extra for me as you were limited to one each and I had sorta promised someone on Twitter I’d try to get him one. After that, nearly two hours(!) we got lunch. Met a friend (who got to meet all the Firefly folk, lucky!) and then, spent next 4-5 hours making my way to rear of show floor. It’s MASSIVE.
But first I went back into the Block, got a cool coffee t-shirt… 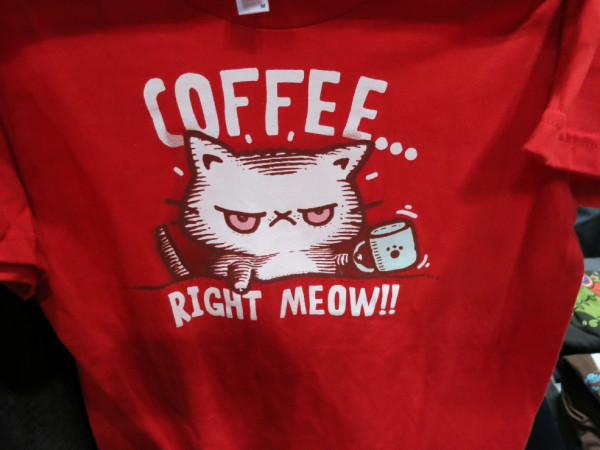 Wanted to buy these, but, sigh, too pricey. 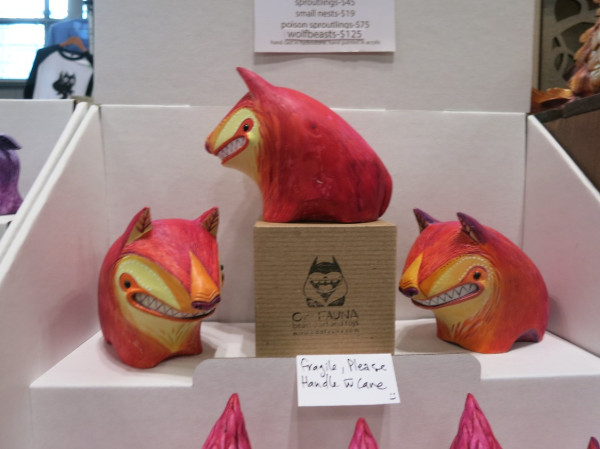 Did get another Tentacle Kitty. Good grief, they are cute as all heck. 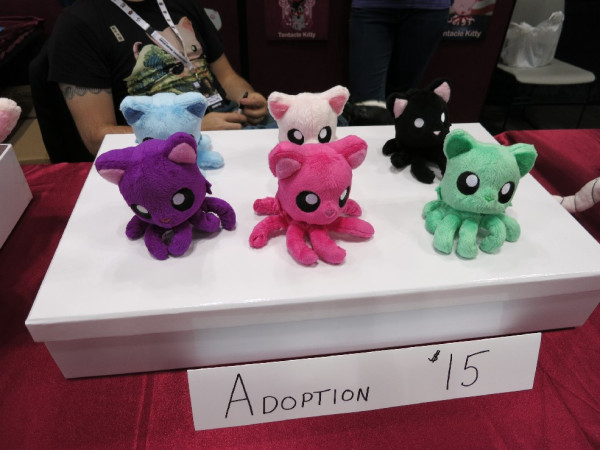 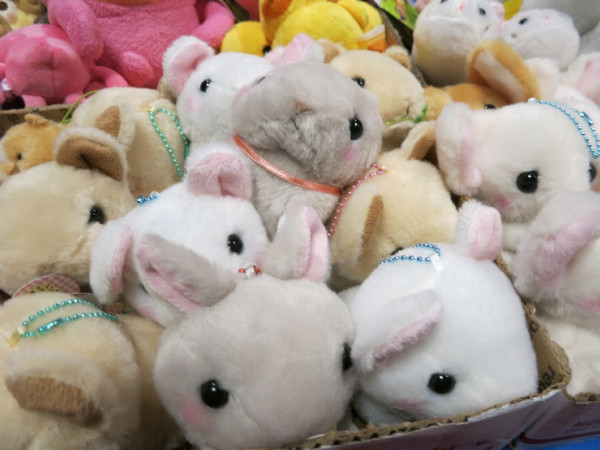 Then there was a giant hamster. At end of my trek, I broke down and got one. A pure impulse decision and it’s huge and now it’s sitting take up space on the couch… Picture down below. It's pink.
Maybe next year I’ll get a zombie alpaca… 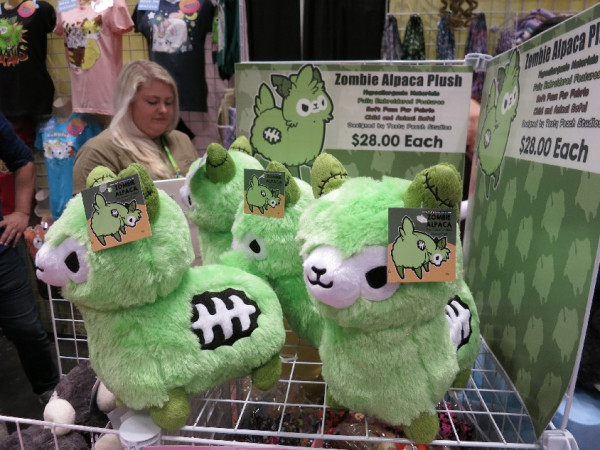 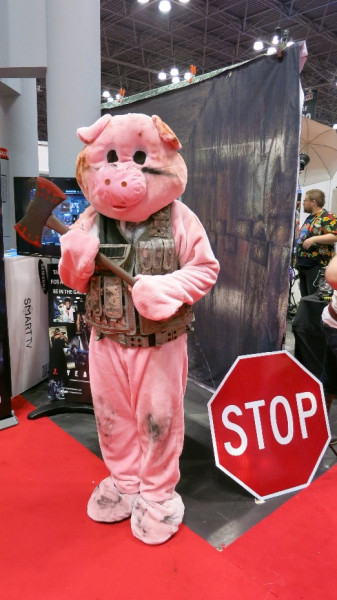 And I found myself taking photos of stuffed critters in people’s backpacks. 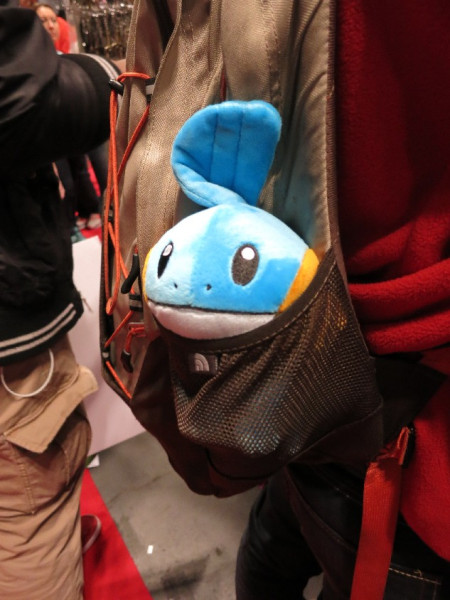 Jurassic World was promoting there at the con and had a guy in the raptor outfit who was incredibly talented. He posed for photos. He tried to ‘eat’ the Pikachu, which had people screaming “not the pikachu!” 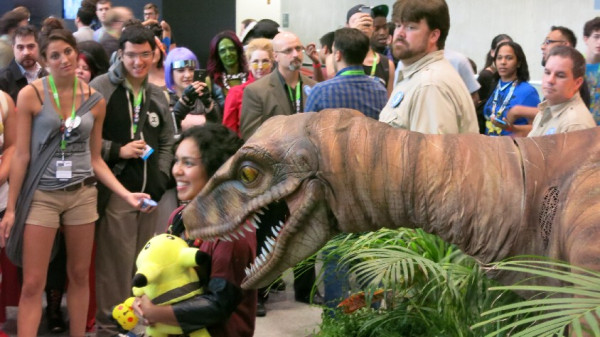 This guy probably just lost out on the Funko Pop exclusive limited edition toy line. One guy spent five HOURS in that line. After doing Toy Tokyo, I said, that’s if for me… 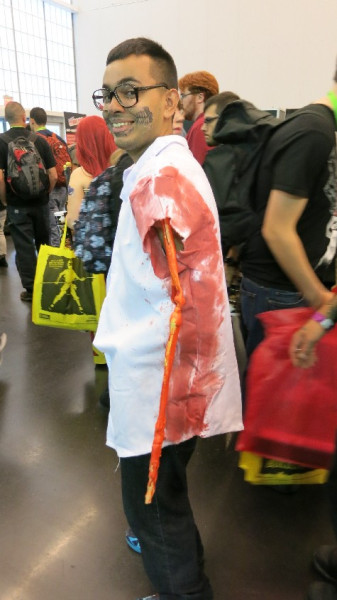 Progressive Insurance had a booth; it gave away a Flo wig, and apron. Apparently Spiderman partook of their freebies ;) 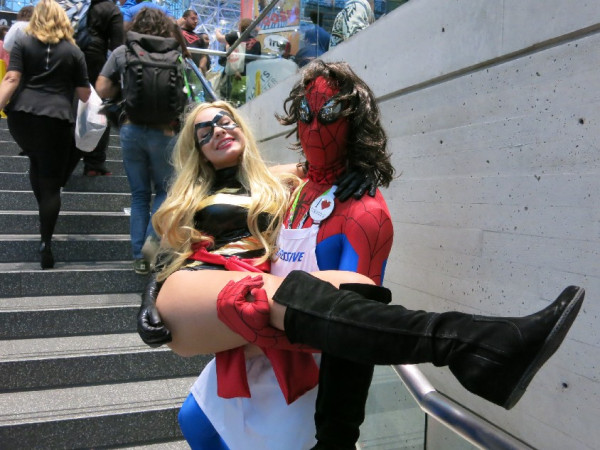 These were the Progressive unicorns, or protector something. I’d have to find out on Google. Around 6:30pm on Friday, they were doing impromptu dancing  in the main lobby. They were pretty good. What happens at NYCC doesn’t stay there ;) 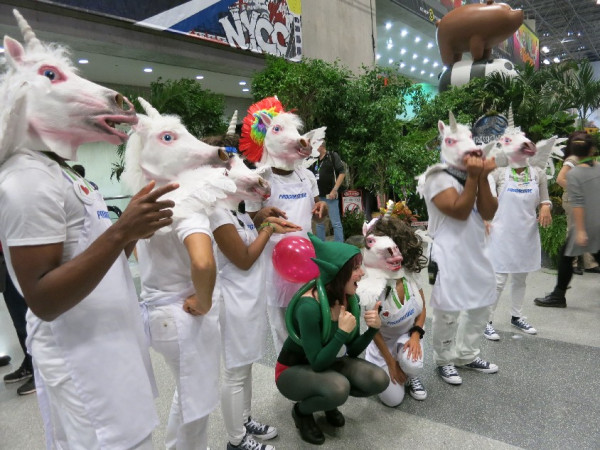 And I scored a collector’s NYCC Geico Gecko. Just had to sell my soul… gave them my name and address, posed for an idiotic photo, but to get the gecko, I had to do karaoke. It was too cute to resist. 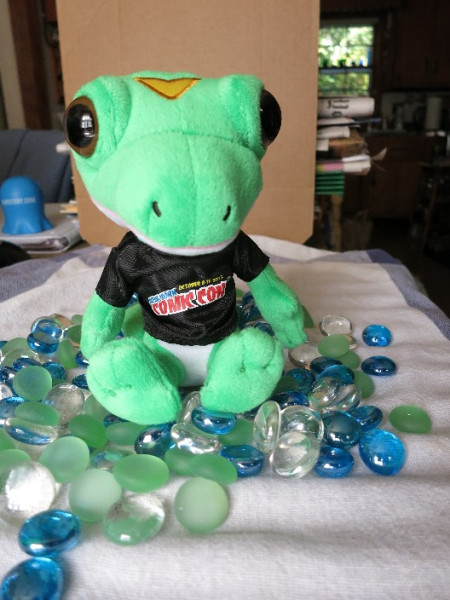 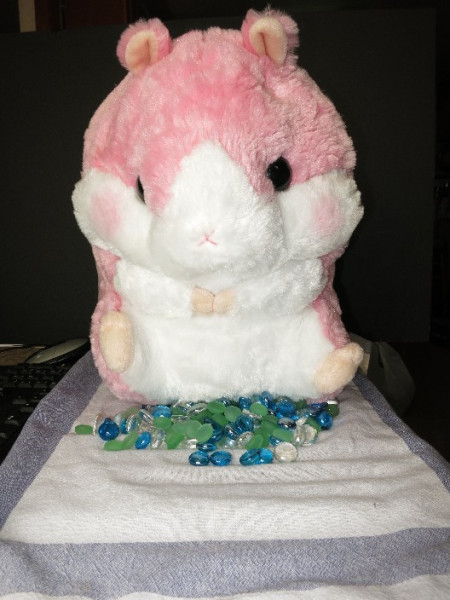 Oh, my el cheapo costume as I went in Godzilla t-shirt and jeans. Figure that the pre-‘infected’ people on Fear the Walking Dead wear normal street clothes, too, so why not? 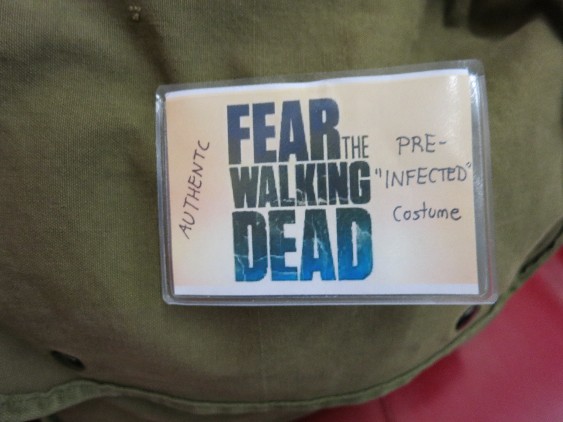 Let’s see, we left around 7:30pm, on the second to last bus back to Grand Central. Ran into someone else on the train back who also went to the con. Lucky guy managed to score 3 or 4-day ticket but didn’t do all days as it was tiring. I ran into several people (younger than me) who said the same thing.
Got home, got to bed around midnight, up at 6:00am (darn work time) and was doing fine till around noon, when I just crashed for a few hours.  We vowed next year to get multi-day tickets but then we said that this year. Maybe next year I’ll take a day off from work and just have 2 computers running…. I wish.
Tags: conventions, new york comic con, nycc
Subscribe